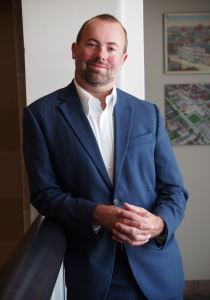 With nearly 20 years of public relations and communications experience – 15 of which have been at the executive level – Chris Floore currently leads the Office of Communications for Macon-Bibb County, the fourth largest city in Georgia. His charge since 2014 when the new consolidated government was created has been to strengthen direct, two-way communication between the government and public.

Chris has been recognized at the state and national level by 3CMA, NACIO, PRDaily, PRNews, SeeClickFix, NAGC, NSPRA, GSPRA, SWANA, ELGL, and Georgia School Nutrition Association. He was named Communicator of the Year by 3CMA in September 2015 and Government Communicator of the Year by PRNews in 2019 and PR Daily in 2019 and 2018. He was finalist for the top communication award by PRNews in 2018 and by the National Association of Government Communicators three times.

He is actively involved in the community, currently serving on the 3CMA Board of Directors, United Way of Central Georgia Board of Trustees, Macon Area Habitat for Humanity, and Southern Interscholastic Press Association Board. He is the Den Leader for his oldest son’s Cub Scout Den, and he is an avid runner, completing more than a dozen half marathons.