As government agencies around the country address the current public health emergency, communicators have been charged with developing effective and creative messaging for residents, a unique challenge to say the least. Over the next few weeks several 3CMA members will share the details and outcomes of their COVID-19 information campaigns, continuing the founding principle of 3CMA that ideas are for sharing.

As part of the decentralization, Public Works and Parks created their own social media channels, separate from the main city accounts. Police already had their own, and ECD uses the city’s main social media accounts.

With this new engagement tool in place, Public Works began messaging specific to its services and function at the city, including its role in the city’s response to the COVID-19 pandemic. These channels (Facebook, Twitter, Instagram) shared important messages on a variety of topics during this challenging time.

Essential workers: When Governor Jay Inslee issued his “stay home, stay healthy” order in March, most of the Public Works-Engineering staff began working from home. This was not possible for most of our operations staff who are responsible for everything from water and storm to fleet and streets. They split into two teams, with half working alternating weeks and using proper social distancing measures and new procedures when reporting for duty.

As our Public Works employees moved through the community to do critical tasks like routine maintenance of catch basins and mowing for public safety, they were met with frustration from the public. Many in the community had lost jobs or were laid off and, judging by their words and gestures, did not seem to understand or appreciate why our staff was still doing what they deemed unimportant work. They could, however, appreciate the need for emergency water main repairs and replacement of stoplights and signage that were damaged in accidents.

As we encountered specific situations that seemed to irritate residents, we also used social media to explain why such tasks were critical. For example, mowing seemed to really bother our residents. We explained that keeping the intersections and roadsides clear of vegetation was important for good sight distance for motorists, pedestrians and bicyclists. We did the post as part of our #FunFactFriday series, so we didn’t come across as defensive. We also highlighted behind-the-scenes staff like our engineers who are working on important capital projects, so when the “stay home, stay healthy” order is lifted, they’ll be ready to hit the ground running.

Keeping our workers safe: Our posts also showed how our employees were keeping themselves safe through proper social distancing and using appropriate personal protective equipment. When one resident said he didn’t think staff were far enough apart during a storm drainage project, the supervisor measured the distance between them to ensure social distance. 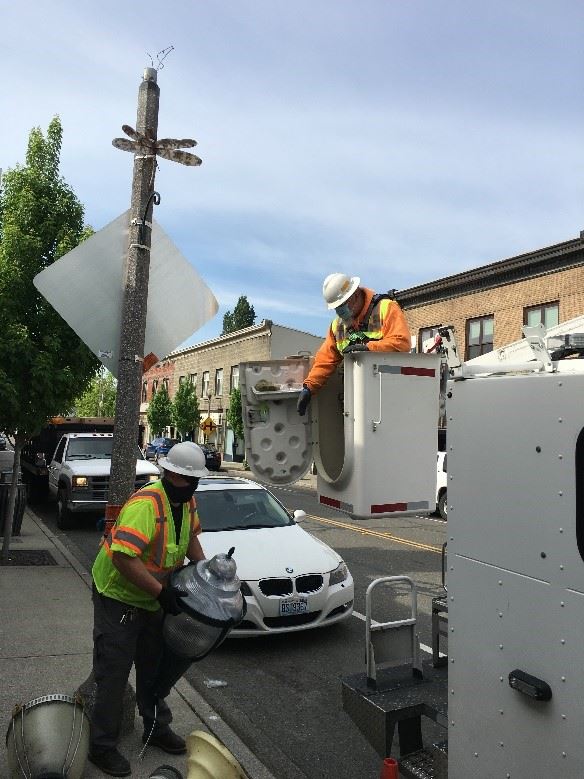 #WipesClogPipes campaign: At the beginning of the pandemic, there was widespread panic that people would run out of toilet paper. We saw an increase in the usage of items like “flushable” wipes which can – and did – clog pipes. We created a campaign to remind people that flushable wipes really aren’t. We did multiple posts on all three platforms and asked people to share. We also paid $50 for a Facebook boost which reached nearly 24,000. Our multimedia department created a graphic that we could share periodically to remind people that only three things go in the toilet. 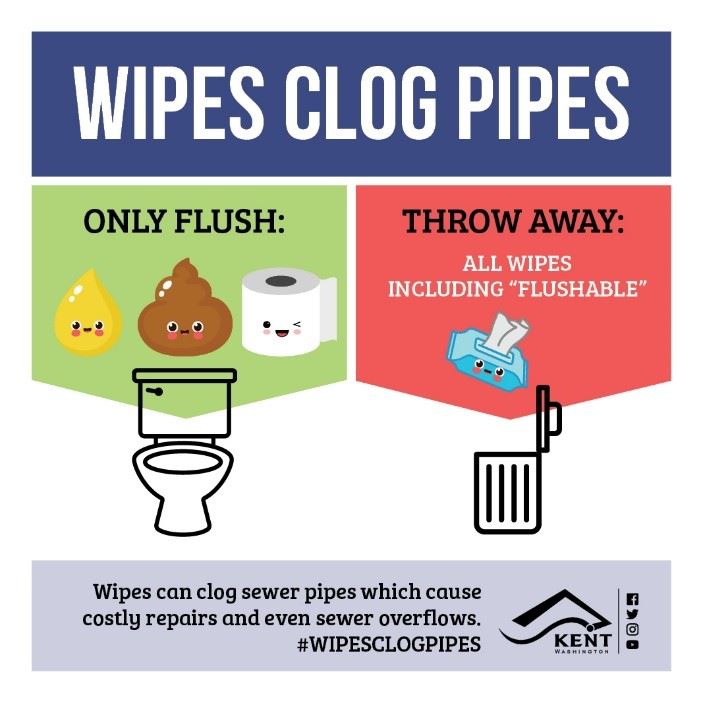 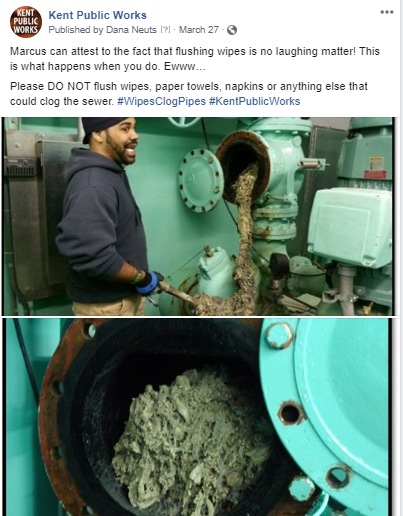 When a resident noted that Marcus (pictured above) should have been wearing PPE, we explained that this photo was several years old and had been staged for a presentation.

Proper disposal of gloves and masks: As our crews moved throughout the city, they noticed that people were disposing of their gloves and masks on the ground, a potential hazard in spreading coronavirus. We shared several messages asking them to dispose of those items properly, but felt it was important enough that this message needed to be ongoing. Multimedia designed this graphic for us to use. 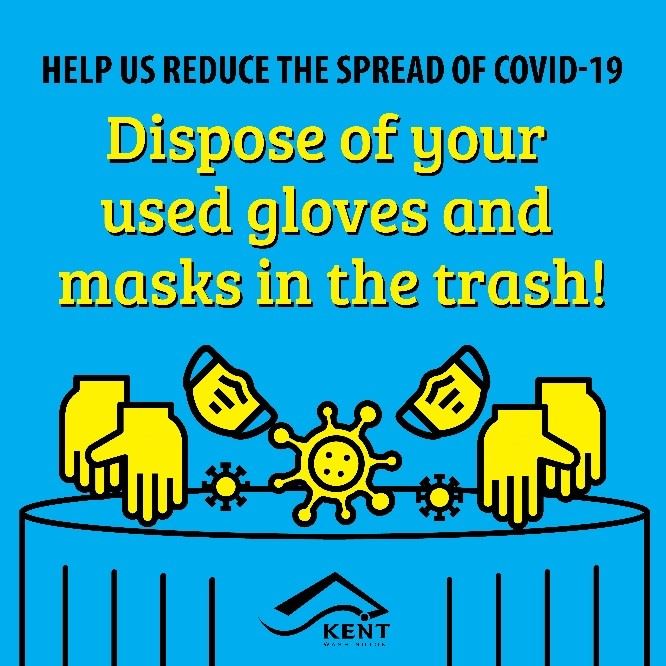 Showing employee appreciation: Like every other jurisdiction, our city is faced with significant revenue impacts. This means there will be staff reductions along with other budget cuts. This has impacted employee morale. Employee morale has also been impacted by public sentiment as some of our workers have been met with resistance in the community. Public Works employees are often invisible to the community, until something goes wrong. To help show our employees we appreciate them, we began a series of posts to acknowledge their work, feature employees in the department and educate the public on the work we do. These are, by far, our most popular posts, and we have gotten great feedback from the employees themselves and their managers. We’ve even had managers come to us asking us to feature their teams. Because not all employees are on social media, after a post has gone live we send a screenshot to the manager who then passes it onto his or her staff.

Eco Bingo: With so many students doing schoolwork from home, we created an Eco Bingo card during April (Earth month) to give kids and parents eco-friendly activities they could do at home, in their yard or in their neighborhoods, while practicing social distancing. It did not get as much attention as we’d hoped. But we would do it again, and we’ll continue to use the content in other ways. 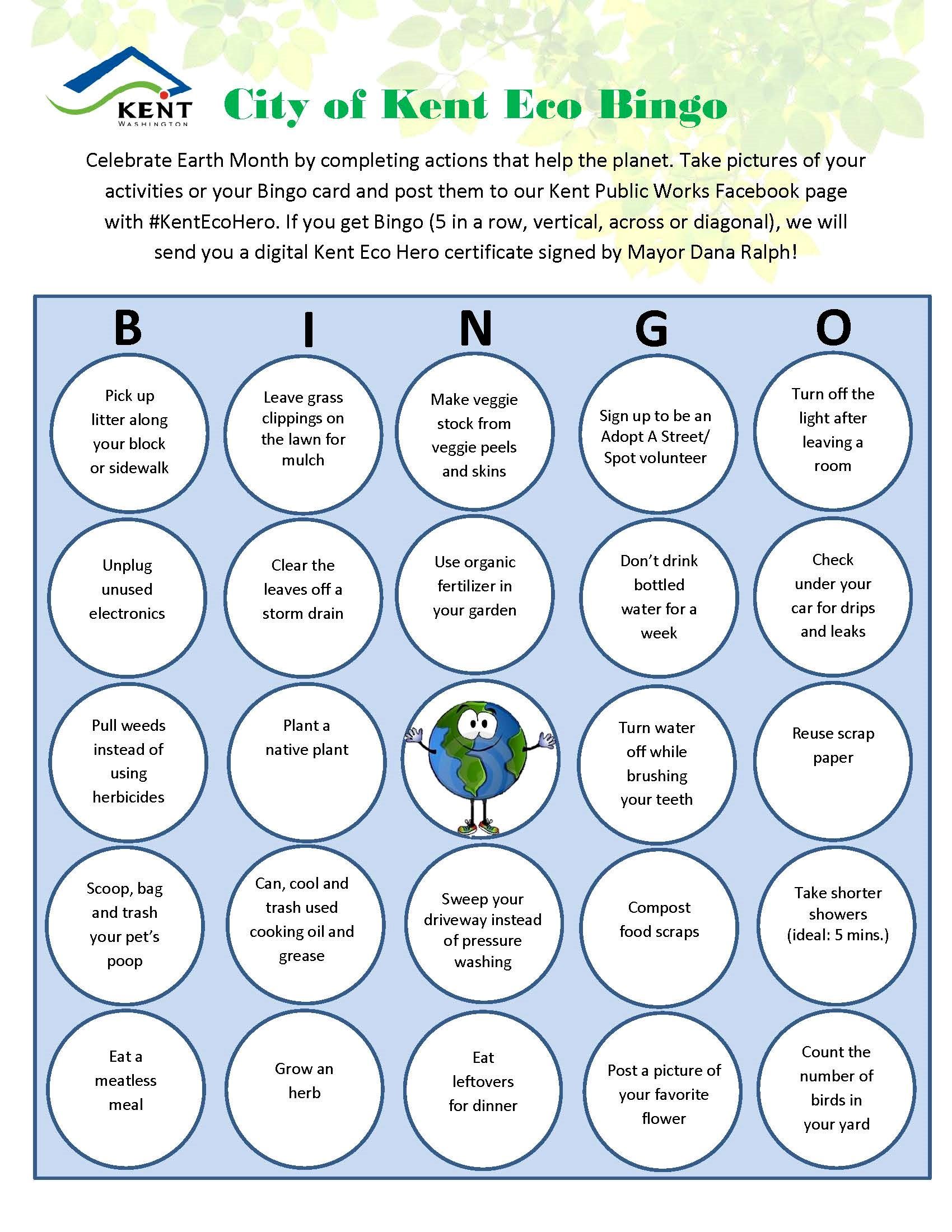 This is just a sampling of how Kent Public Works has used social media for education and outreach during the COVID-19 crisis. We will continue these tactics when life returns to “normal,” so we can share information with the Kent community and educate them on the role Public Works has in providing city services.