In the new media landscape, treat everyone like a journalist

The final straw with our community’s self-fashioned ‘citizen reporter’ turned out to be, in fact, a bunch of straw

In late 2017, a few months into my new position as the one-woman communications team in a fast-growing Chicago suburb, my leadership came to me and asked what to do about Hank.*

Hank was a resident with an axe to grind, and he had recently purchased a blog and social media following from a retiring independent local journalist. He planned to sell advertising and run the blog as a business.

“Can we credential members of the media?” they asked. “How do we decide who’s legitimate?”

Leadership worried Hank would use the blog and its social media following (which, at the time, was larger than our own) as a way to spread misinformation and rumors around town.  They worried he would want to show up at crime scenes, demanding answers and taking photos of dead bodies.

“Would you let a reporter take a photo of a dead body?” I asked.

“Well, no,” my leadership said.

“Right,” I said, having dealt with other Hanks in other communities. “Everybody these days has a cell phone and a Facebook page. So we treat everyone like a journalist.”

In my community we are blessed with several local news sources, including both a regional and a local newspaper, a local radio station and a Patch. As a former journalist myself, I’ve built strong relationships and credibility with our reporters. Our news partners come to us first for official information and give our leadership a fair chance to state our case on controversial issues around town.

But while my leadership and I are happy to spend additional time on the phone answering reporters’ questions and offering the occasional scoop, our reporters do not have access to anything more than any other resident. Whether you’re a reporter or a resident, we’ll take the time to answer your question and offer context. We’ll chat with you after a meeting. We’ll ask you to fill out a FOIA request if you want a bunch of documents. Arguably, the only perk that a press pass will get you is space at a table at the front of our boardroom to plug in your laptop. And most of our reporters watch the livestream from home, especially now.

Hank did, in fact, show up at a few crime scenes. The on-scene officers did what they would do for any journalist – keep them a safe distance back and refer them to our public information officer with questions. He showed up for a few meetings. He got added to my press release contact list. And he wrote some stories we didn’t like, some of which got shared on social media but did not cause lasting harm. He sometimes also wrote stories that were just plain wrong, which his readers pointed out. And then he fizzled out.

In less than a year, Hank’s site went dormant, and soon after our local radio station purchased its Facebook following to spread its own ad reach.

So what killed Hank’s blog?

For one, the same thing that’s been killing all local media – it’s a time-intensive business that pays little. Hank reported, wrote, photographed, posted, made corrections, sold advertising and tried to grow his social media following mostly alone. To grow, a media company needs content, and one dedicated blogger could not do it all forever for little to no pay.

Second, Hank lacked credibility. While news slant is the norm these days, readers still expect those opinions to be based in fact. We contacted Hank about several corrections, which he sometimes made. But the errors cost him credibility with readers and advertisers.

Perhaps the final straw happened in spring 2018 when a small car caught fire near one of our commercial parks. After receiving a call from a resident, Hank had rushed to the scene, incensed that he had heard nothing over the scanner, sure that the fire district – a separate governing body from our municipality – had conspired against the freedom of the press to cover up a criminal undercurrent in town. He took a photo of the small, smoky sedan filled with straw bales and wrote a two-sentence story about car set ablaze, ending with, “The fire district had no comment.”

A couple hours later, the fire department released a statement about the fire, which had been a training exercise. Hank updated his story:

***UPDATE***
This was apparently a controlled test fire, which explains the unusually large amounts of hay. 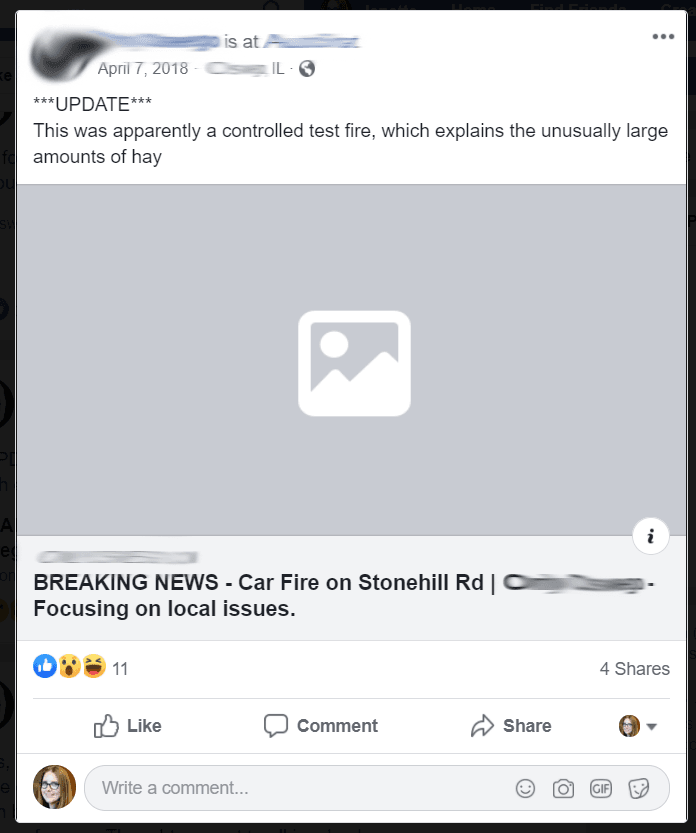 The site shuttered about a month later.

Since Hank, we continue to follow the principle of treating every resident’s question as though it were an interview with the press. Answer honestly as best you can or refer them to the expert. If you say you need time to respond fully, respond in a timely manner. Walk residents through complex concepts or documents and check their understanding. And whenever you’re interacting with a member of the public, always remember that everyone you talk to has a cell phone and a social media account and is one push of a button away from telling the world about how happy they are with their local leaders.

Tips for dealing with bloggers and other self-proclaimed citizen journalists